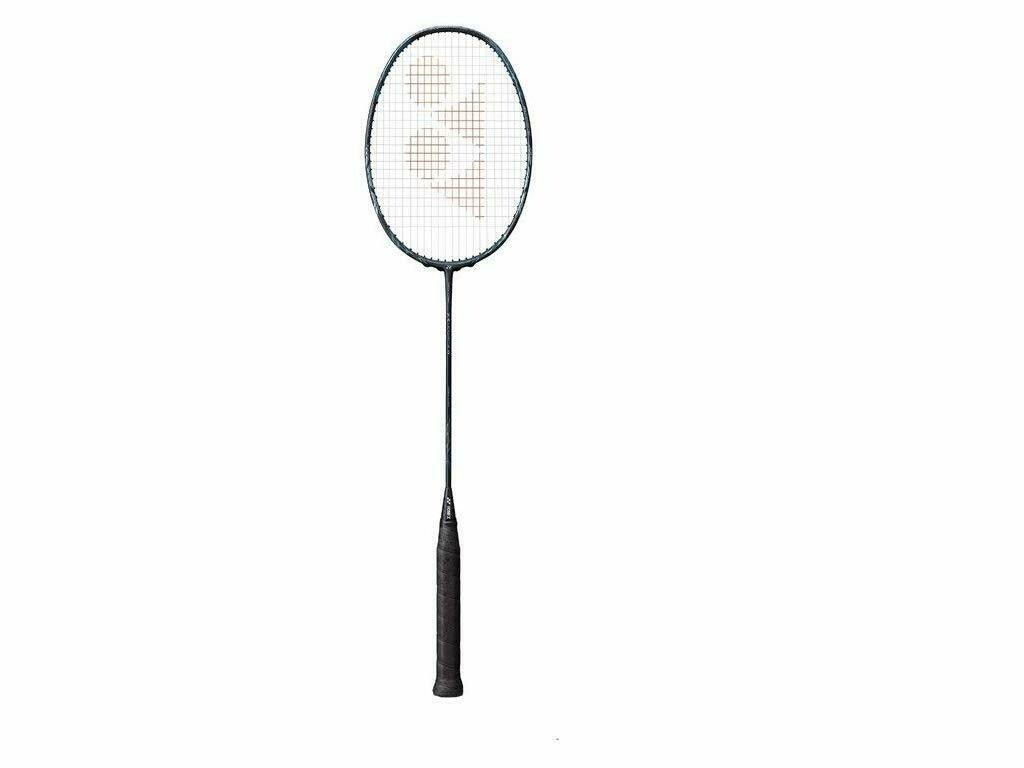 The ultra-thin, yet stiff shaft and ultra-aerodynamic head shape allow the shuttle to be hit with increased power, reducing the deceleration of the shuttle and allowing it to be returned with sustained, ultimate power.

EXTRA SLIM SHAFT - THE THINNEST STRONGEST EVER PRODUCED BY YONEX

Tungsten infused grommets maximize the contact time between shuttle and string. This combined with the TRI-VOLTAGE SYSTEM ensure that the frame flexes in a controlled way, holding the shuttle on the string bed for longer for maximum transfer of power to the shuttle.

Air resistance is minimized by including the tip of the grommet inside the frame, to produce an ultra-smooth, air resistant shape that together with a heavy head delivers a smooth swinging frame with awesome power.

Traditionally, extra weight at the top of the racquet frame has increased hitting power but reduced the speed of racquet handling. In contrast, a lighter top to the frame increases speed but causes a loss of hitting power.

For the first time, the new TRI-VOLTAGE SYSTEM successfully combines the contrasting characteristics of exceptional power and great handling. YONEX has developed a racquet which achieves the combination of heavy smashes and speedy racquet handling.

Voltric is Power: The stiff racquet structure at the top of the frame allows the head to bend in a very controlled way and hold shuttles on the string bed for longer. The thin frame sides then allow the frame to flex more and transfer more energy to the shuttle. This combination allows you to smash with instant power.

Voltric is Agility: In VOLTRIC, the weight is balanced on the top of the frame and at the joint area which allows good handling while also maintaining power. The thin sides of the frame and at the top of the head reduce air resistance and improve the handling even further. Players can now make a full swing even during short range rallies as VOLTRIC responds instantly to even subtle movements.

Another innovative YONEX technology, Sound Filter uses new materials at the two and ten o’clock positions to reduce only high pitched and dull soundwaves. This produces a louder and sharper sound on impact to unsettle opponents, and provides a more aggressive tone to your game for a relentlessly attacking style of play. Sound Filter also reduces uncomfortable sensation from the racquet by rapidly eliminating 31% of vibrations.

To balance the heavy racquet head, the frame has been made smaller to maintain the fast swing demanded by advanced players.

By reducing the drag caused by air resistance, the head-heavy feeling is reduced and racquet handling speed is increased.

NANOMETRIC* improves the bonding strength between the carbon fibres enabling us to take racquet shaft construction to another level. By reducing the amount of carbon in the shaft to make it 60%* thinner than a conventional racquet whilst retaining stiffness, YONEX has created a revolutionary lightweight racquet with lightening head speed and control.

*NANOMETRIC is the new material which applies the NANOALLOYTM Technology of Toray Industries, Inc.

*approximate measurement when compared to a conventional racquet shaft, tested by YONEX

The square-shaped ISOMETRIC frame shape is designed to keep vertical strings at a similar length, as well as the horizontal strings to produce an expanded sweet spot in all directions.